I have found a few images to inspire me. 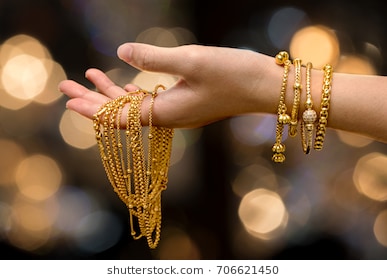 We’ve been doing a lot of work in the studio, recently. We’re taking images of ‘a product’ and then another of ‘the product with a model’. Ours is a big class, and it’s proving a little tricky to find time (not to mention space!) for us all to work.

You may remember, last term, I did some studio shots, with the floral shoes. Sadly, I didn’t have enough time to fit in taking any shots with a model included in the shots. Since the flowers are long since dead, I couldn’t really take more photo’s for a product with a model. Luckily, my trolley holds all manner of photo props, these days. so Ria agreed that it would be okay for me to take some with a new product. Toby (…bless you, Tobes :0 ) “volunteered” to be my model for the shoot.  Although I hadn’t exactly planned my shoot or practised it at home, I had brought with me a pile of costume jewellery, which I thought might make interesting subject matter… I was hoping for some drama, with lots of dramatic highlights and shadows… and, of course,  a bit of bling.

Observing all the necessary H&S regs, regarding making sure everyone was as safe (and comfortable) as could be within the studio environment. We started…

With a little help from my fellow students – John, who is very tall and brilliant for helping with tall things! We set up the lighting rig with a main and fill light, using oven gloves to keep hands safe from hot lamps.  I set up the scene with a black backdrop, a cleverly disguised backpack (for Toby to rest his arm on) and red and black velvet cloths for extra texture and the softness and drape that velvet allows. 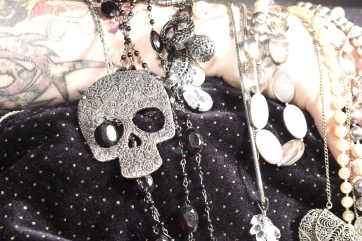 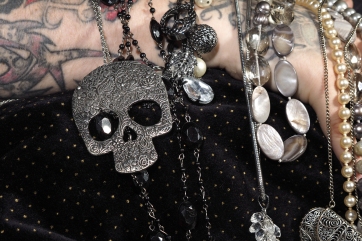 After taking a few shots with the red backcloth, I decided I didn’t like it at all, I felt it was just too distracting from the jewellery, which was supposed to be the main focus of the images. So, we ditched it….

In the second and third shots, the key light set to 2, and a fill at light 1/3, both directed towards the jewellery, but the fill light was too bright, and my f.stop set too low, so the image is bleached out. I raised the f.stop to allow less light through the lens, and got a better outcome. 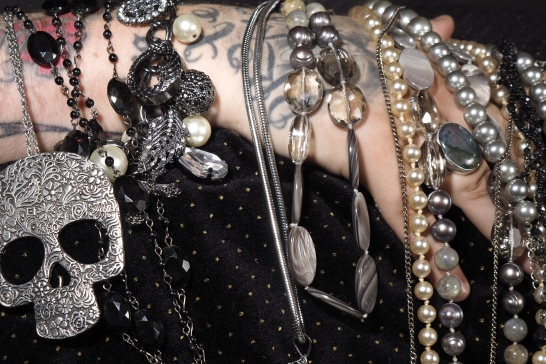 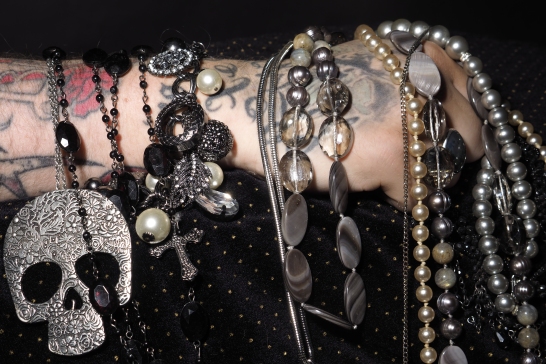 Ria wondered why I had chosen to use both lights directed at the jewellery, explaining that the specular highlights (the areas that show up as bright highlights on the pearls) are appearing as two specular highlights as opposed to one, which would look better. We turned the studio lamp away from the subject and reflected the light using a white reflector board and as you can see, it shows up just the one highlight on the pearls and bling-y bits of the image.

My fellow students and I all agreed that perhaps the theme of the image since although it features some more feminine aspects, such as pearls and sparkly things, the tattoos and Toby’s hands reminded us a little of pirates. We decided that a pirate might be a little more.. er… GRRrrrr!……and grasping! So we asked our valiant pirate-y model to turn his hand over and think GRRrrrr!……

This is my final image for a studio product with model. I really like that you can see the jewellery ‘spilling’ over onto the bottom of the image. I like that the dots of the backcloth are highlighted as little gold sparkles. I also like the juxtaposition of masculine/feminine and the strength of the image.  However, If I could re-shoot this set of images, I think I might ask Toby for a slightly stronger pose. But my heartfelt thanks anyway, dear Toby. 🙂

In complete comparison to my somewhat camp and overdressed scenario, Midori set up a beautifully simple backdrop with a Japanese tea service complete with a red folded napkin.

I love the drama of the creases in the folded napkin and the shadow of the porcelain bowl.  Since time was running very short, I’m afraid I didn’t note down the settings on the studio lamps but got two very nice images. 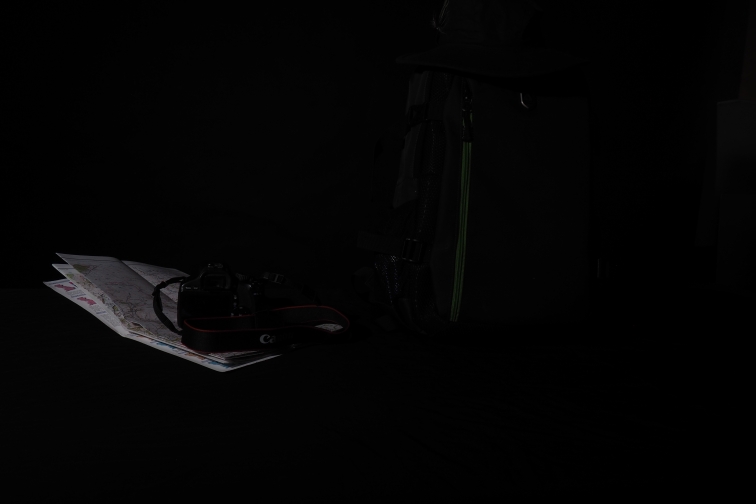 Hannah set up her shots and initially the lighting was a little too dark.  I had my ISO too low, and f.stop too high for the first image on the left, which I changed for the second shot and got a slightly better image, but we still needed to adjust the studio lights.  After a little bit of fiddling about with the lights we got it just right, and took some good clear images. 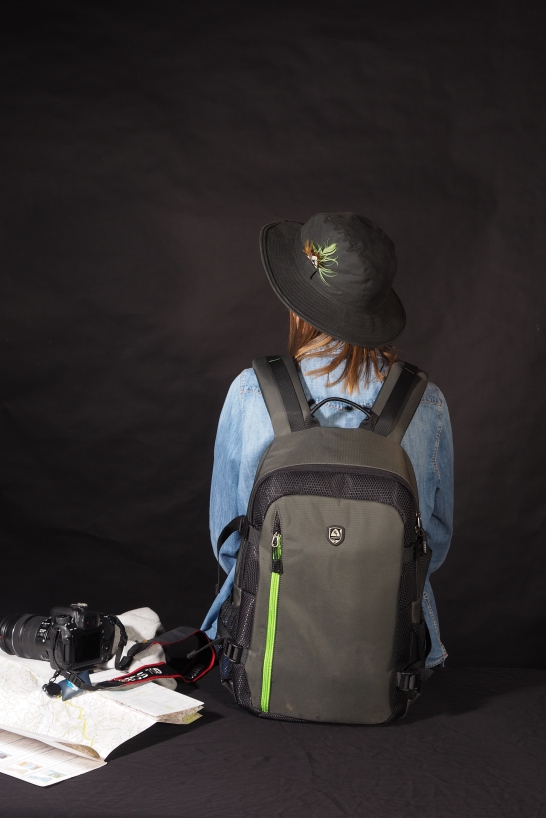 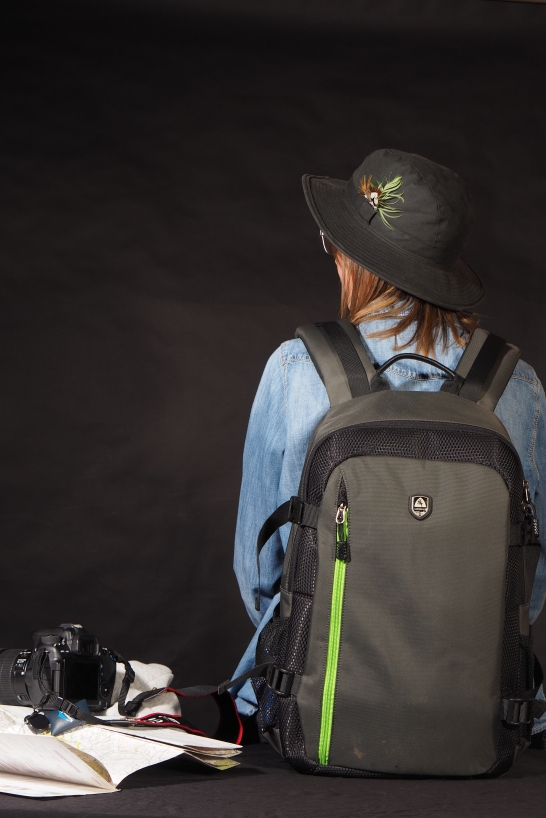 I was the model for Hannah’s shots, so after she had finished, she sat in for me whilst I took my shots of her.

In the image above, I used a wide angle lens but the backdrop is a little too narrow and you can see the classroom wall behind. So I changed my angle to portrait and took some better shots.

I like the first image. Now, you may have to use your imagination a little here, but Hannah is perched on a dry stone wall, looking pensively into the distance at beautiful, rolling hills and the dramatic Brecon Beacons, whilst resting with her map and trusty camera.

The image on the right is my favourite, however,  because you can just see a tiny highlight on her glasses, which makes it look just a teeny bit more holiday-like. 🙂

We still have a couple more studio shoots to do, so this post may well be extended, next week.

Homemaker, crafter, Nanna, gardener, cook, 'spoonie', and now I am back at college as a learner. One day, I hope to be a pro photographer. Come join me on my journey.... View all posts by carafox2012

Sharing my love for photography and my journey through images

Metal and the Geek

The Geek with an Edge

Eating gluten free around the world

My Chronic Illness & Other Thoughts

Retired early due to chronic illness I now write about my illness & current events.